A Small Spark Vs. a Great Forest 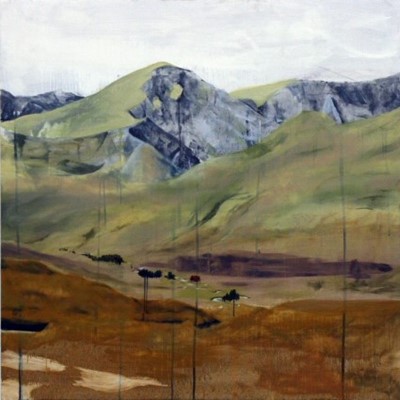 Born in the UK in 1989, Robin Everett was quickly whisked away from verdant pastures to the Middle East where he spent the formative years of his youth, returning annually for a brief respite from the desert. He returned in 2008 to study Painting at Glasgow School of Art, receiving a BA (hons) Fine Art in 2012.

Since then Robin has been forging a career as a full-time artist, following his prize-winning* Degree Show with an exhibition at the Candid Arts Trust in London. Robin’s work, hanging in numerous private and corporate collections across the UK, explores the Scottish landscape as it exists in itself, eternally in motion, ever changing: a divine, self-consuming, primal force. The paintings attempt to codify and connect his experiences of this land.

Robin Everett, already a prize winner, and with work purchased by the Friends of GSA, produced some of the most intelligent landscape painting I’ve seen. They seemed to be composed of a variety of techniques and showed undulating planes, the effect of the wind on the landscape, and could be misty while being also startlingly crisp and lucid in places, having what Francis Bacon admired in a Van Gogh painting, “the violence of the grass”, and achieving that “shorthand of sensation” that was the intention of Bacon himself. It is truly something to marvel at, that the painter can so often give the painting up to the facts of the material, to gamble so often with chance, and yet the painting still coheres; this kind of felicity shows that something is on Robin Everett‘s side.- New Blood Art

Many of those who do paint lack confidence in the medium. Robin Everett is an exception. His landscape painting is bold and ambitious.- The Scotsman