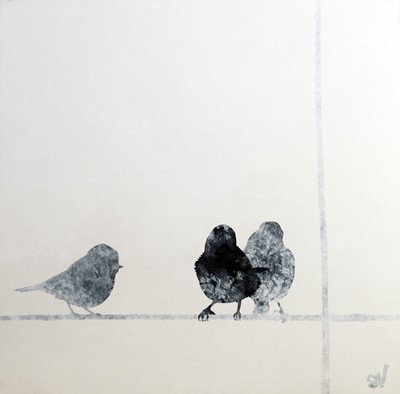 Starlings on a Wire

My artistic practice is concerned with researching and observing birds; assembling a sense of them and their habits over the year by building up an image that gives an essence of the bird without being a full representation. I work with acrylic paints and inks on canvas and paper, as well as using digital printing to produce small artists books. I use silhouettes to simplify images so I can focus on shape and negative space. For some birds i'm more concerned with the story behind the work, for others the importance is an artistic investigation of composition and negative space.

2009 "Morus Bassinus" installation commissioned by The Scottish Seabird Centre for the "Creative Visions of Nature" exhibition as part of the John Muir Odyssey Homecoming Festival.

2009 Lead visual artist - Collaborative art project funded by Midlothian Council and SAC, using artist's books to produce a nature guide to a local walk with pupils at a Primary School.

2000 Travelling and trekking - India and Nepal