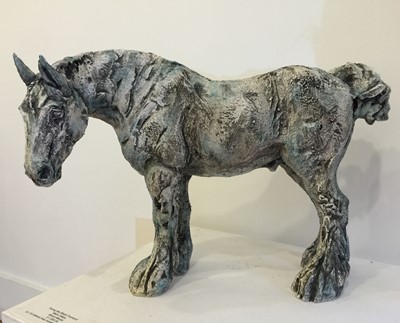 April Young was born in 1972, in Cumbria, and spent most of her childhood moving around the country and the globe. The list of places she lived in includes locations as diverse as Newcastle-on-Tyne and Cape Town, South Africa.

She sold the freight business she started in her 20's in 1997, to embark on a period of self-exploration as a necessary counterpart of the geographical journeys. It was the retrospective reflection on this 'inscape' that lead her back to her childhood love of horses, which was closely followed by a desire to study, not only the form itself, but also what it means both to individuals and, more generally, to a diversity of cultures.

Amongst the themes she is engaged with is the horse, not only as a physical vehicle, but as a vehicle for symbolism, such as its association both with empire and humility; from racehorse to pit pony. For example, the coils used in the coils horses are a universal symbol repeated through the aesthetics and relics of almost all civilisations, be they primitive, renaissance or modern. It is a symbol that unites cultures.

The majority of her work is made in stoneware clay, often crank (tough 'brick' clay). The pieces go through two or often three firing processes. They are totally made by hand, either by modelling 'from scratch' or using a plaster shaper (horse shaped of course!) which she has made to press the coils out into to join them into full forms. The pieces are then glazed, with favourites finishes ranging from glistening pewter glaze, to vibrant crystal glazes, to the organic appeal of smoke firing. She has also begun to have her work cast into metals as limited edition collectibles.

April Young studied art foundation at Derby School of Art in 1998 and became a full time sculptor after joining Glasgow Ceramic Studio in 2001. She has since set up her own studio in WASPS, Glasgow amongst around 180 artists practicing different disciplines. Her work is held in private collections worldwide and she has most recently returned from working in New Zealand and Australia.

April describes the techniques involved in developing the smoke fired horses as follows:

''Working with an organic form often leaves the maker with the problem of how best to represent the natural world in a new way, without simply replicating it. The challenge is to condense what is there naturally, to concentrate the eye of the observer selectively, onto appealing or interesting aspects of the subject matter. In the case of a herd of galloping horses, there are matters of form, perspective, colour, movement and life which must all be balanced. Rather than showing the forms as snapshot, freeze-frames, the pieces have been sculpted as a moving animal would appear to the naked eye.

Hence, the features, particularly highly mobile parts such as hooves and legs are loosely defined. Matters of perspective have been dealt with playfully by altering the scale from the tiny to the gargantuan! The natural elements played a large part in dealing with questions of colour, movement and life. Earth and water combine as the medium of clay; in this case I have chosen grogged cray to reflect the strength and true grit of the galloping horse. Fire produces the smoke which in the firing wraps around the body of each individual horse and holds them together visually as a group, lending the surfaces light and darkness, as though they are galloping through a forest. The holes in the bodies of the horses give them an aerial aspect as they leap weightlessly.

Her work was recently featured in 'Scotland on Sunday' magazine and since becoming the regional Shell Live-wire winner she has received much critical acclaim.